HOW IT ALL STARTED


So far, the journey of Hooked On You has been quite an adventure.... It's the hardest thing I've ever done and it's been really awesome! Did I ever picture myself doing something like this... designing lingerie? Never!

Here's how it all started...
A few years ago, some friends and I were engaged in a conversation about lingerie, when a particular friend had us all laughing with a rather theatrical demonstration on the perils of attaching suspender clips to stockings.

A few months later after purchasing a bra, I noticed a mannequin wearing some suspenders and remembered the funny 'demo' antics of my friend. A very polite, but awkward looking shop assistant asked if I needed help. Realizing I was standing there smiling at the mannequin, I  felt a little embarrassed, so I told the shop assistant my brief story and to my surprise, she told me suspenders did look sexy and she too thought suspender clips were a nightmare to attach, in particular to the back of stockings.

That night, I started thinking and drawing other alternatives to the suspender clip, surely there was another easier way! At that point my competitive nature kicked in and I was going to find a solution.

I bought so many hooks, clips and bits and pieces from haberdashery stores and made prototype after prototype. The months went by, but I wasn't giving up, there had to be a way!

Then something inspirational happened! On a visit to my Mother's home, she handed me a large scroll, given to my late Father years ago on one of their trips to Germany. It was the Rosemeyer  family tree from my Father's side. Mum wanted me to have it and to record my family's names under my Father's name. We gently rolled it out on my Mother's table and I was in awe to see the Rosemeyer name from Loeningen, Germany date back to the 1700's. One of the names held my fascination, a man by the name of Bernd Rosemeyer. As a little girl, I remember my Father telling me stories about a relative, a famous formula 1 racing driver from the 1930's called Bernd Rosemeyer.

I went home and looked up Bernd Rosemeyer on the internet and was intrigued at this piece of family history. Bernd was tenacious and adventurous and intertwined was an amazing love story. He was admired by many and is still remembered today. The V16, 520 horsepower with it's mid engine and rear drive made it a difficult car to handle, but he drove it his way and to several Grand Prix victories. It's a wonder a film hasn't been made of his short life! He drove for Auto Union with the four traditional rings, now known as Audi and when I saw a picture of  Bernd Rosemeyer sitting on his Auto Union car with the four rings, I had a light bulb moment, this picture was telling me something! I then knew exactly what I had to do.... 4 suspender rings! 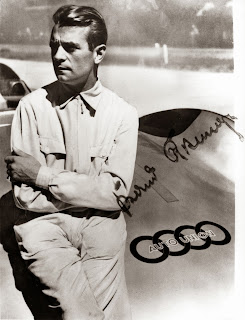 Thank you for reading my blog and if you have any questions please feel free to contact me at my email, ingrid@hookedonyou.com.au

Hooked On You Store